Are We Keeping You Up?

The scene: At Grandpa A's house, about 9pm.

The players: Grandpa A and N (J is already asleep).

The event: Never-before heard phrases coming from a three-year old. 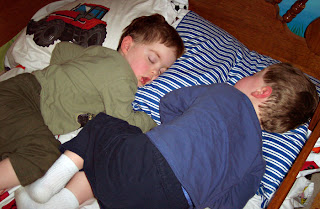 Posted by Lissa at 3:11 PM No comments: Links to this post

The Rule of Three

We've been dealing with Three at our house. Two boys who are Three as a matter of fact. (Well, they're really more like Three and a Half, but we'll call it Three just to make it easier to write about.)

The thing about Three is that you have no idea what's going to set it off. And by "it", I mean your kid. And by "no idea", I mean that it could be absolutely anything - from the temperature of the water in the cup you just put down in front of it, to the shade and/or texture of the toast you lovingly prepared for it.

Three wants to do everything for himself. No helping. No helping at all. Buttons on pants? Three wants to do that button, even though Three has no idea at all how to do a button. Carrying a plate to the table? Yeah, Three will do that too. Don't try to help or offer advice about not spilling. Spilling is just something you'll have to learn to deal with, lady.

And what happens when you don't follow the unknown and unwritten rules of Three? Tantrum. I will admit that I have become an absolute slave to the tantrum. I will do almost anything to make it stop. I have been known to take a flailing, screaming Three all the way back down the basement stairs to the garage and buckle him back into his car seat - just so that he can undo the seat belt himself, as he wanted to in the first place before I so rudely assisted him. I have also made a special trip to Gymboree to replace the sticker Three lost and didn't care about an hour ago until Three noticed the sticker on his brother and pined for it. And now Three Will. Not. Let. It. Go.

Before I had children, I was very Judgy-McJudgerson about parents and their hoodlum offspring. With their loud noises in public and their whining and the parents with their DVDs in their vehicles substituting for quality interaction. Now I think I understand. Those parents are tired. Those parents just want it to be quiet for just a little while. So driving all the way back to Gymboree to replace a lost sticker is completely acceptable in the grand scheme of peace and quiet.

Oh yes, Three also likes to say things like "I love you with my whole heart." And that makes things pretty good too. Until the screaming begins again. 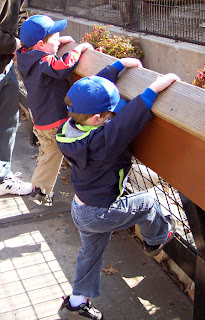 Posted by Lissa at 10:13 AM No comments: Links to this post

I Never Thought Of It That Way

The scene: Putting away groceries in the kitchen, specifically putting hot dogs into the fridge. (Not for me! For my husband! I would never eat hot dogs!)

N: Mommy, what are those?

Me: Those are hot dogs.

N: Hot dogs live inside corn dogs!
Posted by Lissa at 3:10 PM No comments: Links to this post

N has been creating stories to tell us. They come in installments, like mini-chapters, all revolving around the same elements with details coming in at random times.

N tells us he has a yellow house in California made of brick. In it, live his daughter and so many toys that he can't live there and has to come here (our house) to sleep.

While blow-drying my hair this morning, N came rushing in, shoving the door open, shouting, "Mommy! Mommy! My yellow house is made of bricks and it fell down! I have to rebuild it!" Then he ran out.

I have no idea where this is coming from, but I'm excited to hear the next chapter. 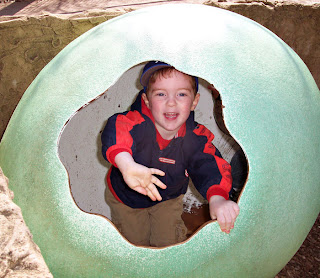 Posted by Lissa at 1:27 PM No comments: Links to this post