We don't worry too much about bad language in our house. Byron and I don't swear much and our boys have an insanely sensitive awareness for what's appropriate for their age group. In fact, I would almost say at times, it borders on being too sensitive - but we manage okay.

So, when we do have an incident with swearing, it's doubly hard to keep a straight face or to know what to do exactly.

The four of us were playing a board game the other night when, unexpectedly, on a bad turn, Jack raises his fist to the sky and shouts, "Damn you, bird!" Byron and I were speechless and then had to bodily struggle to keep in the laughter. It was just so out-of-the-blue - and he so resembled an old man, shaking his fist at the world in rage. I didn't have a clue what to say. So, once we calmed down and got our silent laughter under control, we had a little talk about using the word "damn" and about other words that might be more appropriate.

A few days later, Jack and I were having a conversation about oxymorons versus irony (yes, I am still an English major at heart), like jumbo shrimp and as clear as mud. He told me knew an oxymoron - "it's as cold as hell." Oh my.

After I recovered, I again told him that "hell" is usually considered a swear word - and so it's probably not a good idea to use it around his friends or at school. But that I was proud of him and his command of the English language.

I have a feeling we'll be having a few more conversations like these over the next few years. Until then, I'll just do my best to prepare for the unexpected. 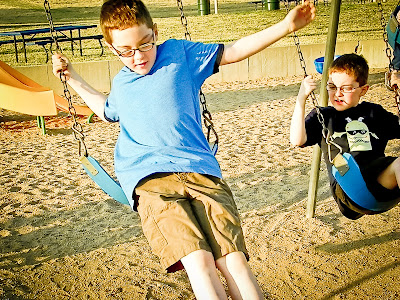 Posted by Lissa at 1:11 PM No comments: Links to this post