J has a crusty, yucky ear.

It's one of the side effects of having tubes put in that they don't really warn you about. That all that yucky gunky stuff that gives your child an ear infection will now drain out of their head just like a runny nose with a massive sinus infection. It is the exact consistency of snot. And his ear is, of course, SORE AND HURTING, because it's like having an inside-out ear infection. So J does not want us to clean his disgusting ear (to put it mildly), even when the entire side of his head and neck are covered in, essentially, snot.

The boys and I had lunch with my father yesterday, who had graciously spent the previous night with the boys so hubby and I could have a night away in a hotel for my birthday. (That sounds very exciting, but we actually each slept in our own queen-sized beds, blissfully taking up as much space we wanted without any boys kicking us or crawling over us or taking our pillows. It was the perfect birthday present.)

At lunch, Grandpa was trying surreptitiously to clean J's dripping (yes, dripping) ear. J was not happy. I reminded J that we needed to clean his ear and put ear drops in when we got home (looking back on it, not sure why I brought it up at all - was I trying to prepare him for his upcoming torture?). Grandpa, in his usual way, then tried to diffuse the situation with humor by suggesting various items that should go into J's ear instead of medicine and a cotton ball. All three boys got into it, suggesting bananas, elbows, toes, even the obligatory BUTT IN THE EAR and FARTING and POOPING that N and J would of course have to suggest.

But they drew the line when Grandpa suggested putting his cheese sandwich in J's ear: "Grandpa, that's disgusting." 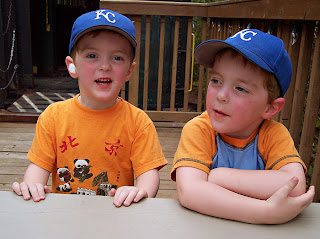 Not Sure How To Say This

Have you ever been woken up at 3am and asked to function as a normal human being? Some of you will know what I mean because you are living that life right now, with babies and feeding and diapers. But my guys are four-years old. I am out of practice.

Which is why I found myself driving to work the other morning, suddenly remembering my 3am actions of the early morning, crashing down on me in a thrust of clarity.

J woke up at 3am (precisely - I remember looking at my clock as in WHAT THE HELL DAMN TIME IS IT????!!!). He, for some reason, had turned on the bathroom light which came shining down on my face like the eyes of God. The fact that we have a night light in there to help guide small and big boys alike who need to go pee in the dark didn't help him, apparently. So I got up to make sure he was okay. He was not okay. He had gone potty, but, in the process, had ripped his pull-up. Those pull-ups are supposed to go back together with some kind of fake velcro-thing, so I worked on that for a few minutes. It would not cooperate. And J was not in agreement with my plan - to just get another freaking pull-up already so we can go back to sleep. He wanted me to fix it, and fix it now, before the screaming commenced.

Did I mention it was 3am?

So I stumbled to the kitchen, got the blue painter's tape which we keep on hand for securing down Hot Wheels tracks, and I TAPED HIS PULL-UP BACK TOGETHER.

I'm sure that any parenting book worth its salt (what does that phrase mean anyway?) would have had a thing or two to say about my actions - something along the lines of being in control of your children instead of letting the threat of their screaming manipulate you into doing their bidding, even at 3am.

But now, as the mother of TWO FOUR-YEAR-OLDS, I subscribe to a different style of parenting - the MacGyver school. Our motto: you make do - and you do it fast. 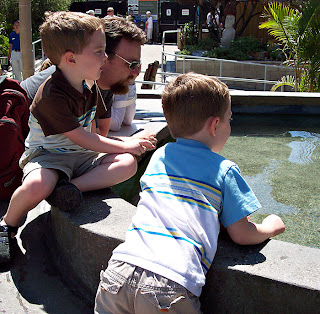 Posted by Lissa at 3:54 PM 4 comments: Links to this post

The boys were pretty much okay when we left them at school on Wednesday morning for their first day of preschool. N was enthusiastic about waving us out of there while J was more reluctant. Luckily the teacher, Miss K, had a cool collection of cars and a track that needed building. If they know anything, my guys know how to put together a track.

The night before, I had prepared them for the photo-taking opportunities I was going to be requesting of them in the morning. I told them how important it was for me to get a picture of them on their first day of school every year, so we would have it for their scrapbook. Imagine my surprise when they not only LET ME take a photo of them but they ACTUALLY SMILED. It's a rare thing.

So school is a success. They enjoy it, and I really didn't even cry or anything. (Okay, well, maybe a little...) 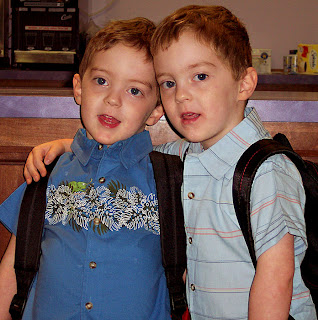