So is everyone ready for the holidays? Is anyone else sick of that question?

We are ready, at least as ready as we can be with two 5-year-olds who believe that writing a Christmas list to Santa means Santa will be bringing everything on that list. Including a go-kart (real-life-sized). This despite the normal rounds of repeated tantrums and whining and general rowdy craziness that ensues when two boys try to outdo each other in the volume department.

Nathan has started a new type of temper tantrum whenever he "loses" at something - Wii Sports, UNO, whatever. He throws down whatever he's got in his hands (Wii remotes, cards, etc) and then STOMPS off to his room, shouting at the top of his LUNGS that THIS IS THE WORST DAY EVER and that he is THE WORST PLAYER EVER and he cries and stomps some more and slams the door repeatedly. We've learned mainly to ignore him because it's just too funny. And kind of sad, yes. Because he really is the WORST PLAYER EVER. (Not really.)

His pre-school teacher once commented about the boys' perfectionist streak (i.e. crying and insisting on starting all over whenever they messed up writing their names) and I told her that it was because we made them do things over and over and over and over again until they got it right. And as she paused in horror to absorb what I had said, I realized that it didn't sound as funny when it came out as it did in my head. Teachers don't like to think you are mentally abusing your children apparently. Noted.

Jack has fits that are much more quiet by comparison, and yet, not any less annoying. Our only threat to both of them has the been the ubiquitous SANTA-IS-WATCHING-YOU threat. And what will I do after Thursday?

There have been many sweet moments as the boys are finally (after 5 years on earth) realize what Christmas is all about - and of course I mean secrets and presents. They each picked a present for the other, and it's been the biggest challenge to convince them to keep the secret from each other. Then they have some kind of secret with Miss Jessica (our nanny) that I'm sure will be unveiled later this evening when we do our Christmas with her and Miss Ashley. Nathan has told me "It's NOT a nativity set." (That really threw me off track.) 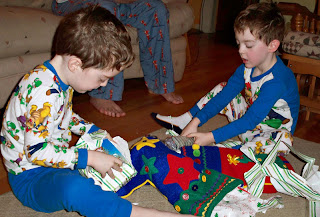 Posted by Lissa at 4:07 PM 2 comments: Links to this post

Nathan: "Mommy, want to hear a joke I made up?"

(And another original, this time from Jack.)

Jack: "What is a skeleton's nickname?"

Nathan: "Yay! That place has games and rides!"

Jack: "And they're a proud sponsor of PBS Kids!" 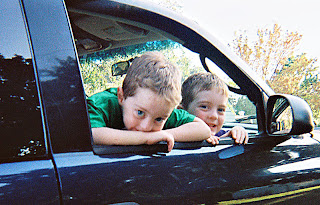 Posted by Lissa at 4:14 PM No comments: Links to this post