Recap of This Week

N: What are you doing, mommy?

Me: I'm putting on my moisturizer.

N: Oh. I guess I'll wait here while you put on your washer-dryer.

N: Hey mommy, my favorite part of that song was when he goes "Whoo-whoo-whoo."

J: Yeah, but MY favorite part of that song was the whole song.

Me: What did you do at school today guys?

Me: Nothing? Really? You just sat there and stared at the wall?

J: Yes. Nothing. We didn't jump in the foam pit.

N: And we didn't do anything fun. We didn't color either. 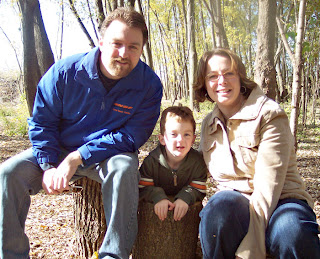 While watching the boys kick each other under a shared blanket this morning, each struggling to hog the whole of it for himself, I caught myself ACTUALLY SAYING THESE WORDS:

"You know, boys, Santa Claus is watching you right now to see if you're being a good brother. He only brings toys to kids who are good co-operators."

The last of my self-respect is officially gone. 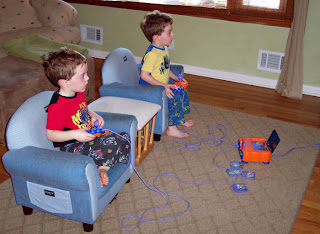 J: Mommy, how long do I have to go to school?

Me: Well, people normally go to school until they're about 18.

Me: How old are you now?

Me: So how long do you still have until you're 18? 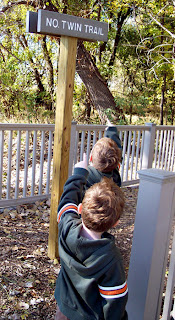 So, I know - I have spoken nary a word about Halloween as of yet but that's because my workplace has unceremoniously banned Flickr from our approved sites (eBay is still okay thank god). I say unceremoniously because no one informed me until I noticed all of my blog photos were broken links and I panicked and thought the internet was broken and hyperventilated a bit because, really, what else would I do with my time? Then I figured it out and just became sad because now I have to do my personal photo sharing on MY OWN TIME and that's really just not fair.

So Halloween was great, yadda yadda yadda, I'll have photos later. In the meantime....

We wanted to go out for lunch on Saturday and, being of course forced to take our children with us, we attempted to convince them to ALLOW US TO GO TO A DIFFERENT RESTAURANT. We normally take them only to one of three places: Mimi's Cafe, Steak 'N Shake, or Quiznos. At each of these fine eating establishments, the boys only eat bread or pancakes, so I don't see why they care so much. Plus the wait staff now sees our family as REGULARS (two boys who look alike and eat only bread kind of stand out), and I prefer to remain anonymous, like all the other miserable parents that are forced into eating where their children demand (and make huge messes).

Since the boys love bread so much, we talked them into going to On the Border. I use the term "talked them into going" loosely because we asked them to expand their horizons, they vehemently disagreed, so we told them we were going anyway. Plus there are chips there and tortillas and lemonade - all of which fall into the approved food list for my children - so I figured they would eventually be won over.

As we walked (dragging children) into the restaurant (with only one time-out stop), we passed a happy couple with their baby in an infant carrier blissfully (and quietly) leaving the restaurant. I wanted to shout at them, "DID YOU ENJOY YOUR TIME EATING OUT?! IT'S ALL ABOUT TO END IN A FEW SHORT MONTHS!" but I thought they might think I was crazy. Plus we already looked like people to avoid, what with a boy under each arm, holding them up by shoes and the back of a jacket, respectively.

The boys did eventually eat tortillas and chips and lemonade and a decent time was had by all. Our next adventure: trying to get in and out of Best Buy without having to purchase a video game. Wish me luck. 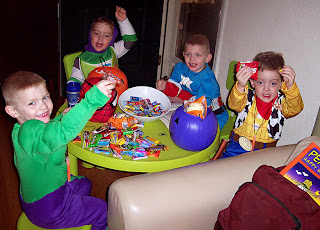