I had to get up early for work today (joy!) and of course, Jack woke up early as well (ruining my plans for a quiet escape before the children needed me). Once he was dressed and had made his bed, which are the required morning chores for my two four-year-olds, he was allowed to play video games. Yes, at 6:25am. Don't judge me - I need diversion so that I can put makeup on.

Jack was playing alone quite contentedly but kept asking me when Nathan was going to get up, so he could play video games too. I kept telling him that Nathan was asleep as it was VERY EARLY and maybe he should go back to bed also. Needless to say, he didn't agree.

Finally, I heard a terrific shout from Jack and found him approximately one inch away from Nathan's sleeping face, yelling, "Nathan! NATHAN!!! WHEN ARE YOU GOING TO WAKE UP???!!!"

That woke Nathan up. He was luckily not screaming himself, having been awoken in such a fashion, but was instead rather groggy. And still not ready to play video games, much to Jack's disappointment. 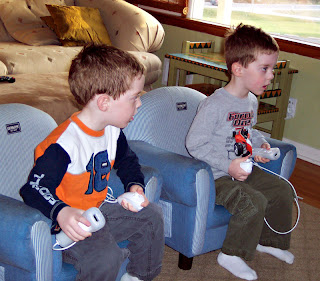 Judge you? Please, your 4 yr old makes the bed!!! I love your stories about your sweet boys (ok yelling in the face not so sweet)! I am pretty sure it only amuses me b/c my boys are one and it is not yet happening to me YET:)

yeah, i'm impressed as well about the bed making, we rarely accomplish that. Helen is into waking Jack up now and the result is usually pretty ugly....I always say don't wake the sleeping beast!