So we had our first soccer game last Wednesday. It was EXTREMELY cold and very wet. I did not want to be outside at all. We were bundled up as much as possible, with hats and mittens and several layers under the jerseys. And yet, the game was not called off. The brave parents dragged their children to the field (some literally kicking and screaming - the kids, I mean, not the parents) and yet, still the game was not called. The coach even apologized for the game not being called.

And so we began the game.

There were not enough kids to create a full a team for each side, so we combined and Operation Swarm Ball commenced. My friend S was there with her hubby Z and her twin boys C and Z. C and Z have not been all that enthusiastic about soccer practice thus far. They have had to be seriously cajoled into participating. But when the coach blew the whistle, C and Z were off and playing! Who knew they just really wanted to play soccer? And not be bothered with practicing and refining their art? They were out there on the FREEZING WET field, running, kicking, falling down and generally being the adorable soccer stars we all knew they would be.

And my guys? The boys who had thus far participated in soccer practice pretty well? They refused to play. They held onto my legs and kind of cried/whined their way through the 15-minute game, refusing to even stand on the field with their team. When I placed J in the soccer goal and told him to try out being a goalie, he complied for approximately two minutes, until the swarm came running toward him at which point he burst into tears and ran out.

I definitely think they're ready for t-ball. 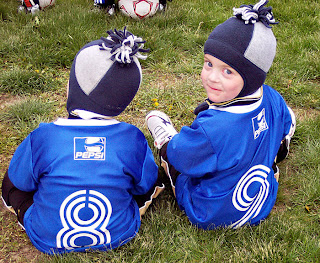