Since returning from my mom's house after a week's vacation there last week (and a gloriously quiet yet sadly empty house for me), the boys have been watching nothing but Baby Einstein DVDs. Apparently their two-year old cousin E loves them and convinced our boys to watch them while at my mom's house.

I had ours (all 15 of them) all packed up from their baby days (and don't give me crap about toddlers watching TV - I HAD TO TAKE A SHOWER AT SOME POINT). So upon their return from my mom's and their insistence on watching Baby Einstein, I had to dig out the entire collection. For the last four days, they've watched nothing but Baby Einstein. No Wow! Wow! Wubzy!, no Monster Jam, no I Spy. It's crazy. I can't believe those movies keep two nearly-four-year-old boys happy and entertained, albeit in twenty minute intervals.

Before each movie begins, Julie Aigner-Clark, founder of Baby Einstein, tells the parents about the company and then announces, "Enjoy the show!"

J has added his own two cents. Each time he hears that line, he shouts back, "I will!" 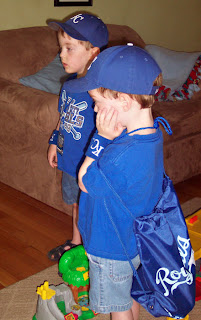 Oh goodness that's cute. I announced something similar when I watched "mister rogers neighborhood' when he sings 'wont you be my neighbor' I said back 'i don't want to be your f'ing neighbor' (i was only a toddler) I usually don't cus, LOl.