(I have officially counted - and I have used the word "potty" in my post titles more than any other parent blogger out there. Maybe it's time to find a new word for potty.)

It's hard to be the only girl in a house of boys. I believe I've said this only a MILLION times in the last year (it really only became hard once we started the potty-training), but that's only because it's so true. My husband has even argued with me that because I am truly overruled in all aspects, you know, being the only girl, why should they even bother putting the seat down anymore? (My argument that this is what civilized people do doesn't hold much sway.)

So I hold my tongue mostly when the talk turns to farting and burping and pooping and peeing. Mostly. I know that if I make a big deal out it, I only draw attention to the talk as a way to get me riled up. And those are the only kinds of things that DO DRAW THEIR ATTENTION like an arrow, adding to their mental list of ways to drive mommy crazy.

As we drove to a friend's house the other night (another mommy with twin boys and a husband, god help her - we obviously have many things on which to commiserate), the boys noticed a bug on the window.

I told them, like an IDIOT, that it was not a bug, it was bird poop.

And the potty talk commenced.

They had never seen anything as amazing and delightful as that bird poop. It's white! And green! And brown! Wow! No, wait, it's not bird poop! It's boy poop! No, it's dog poop! No, it's man poop! (????) Laughing like hyenas and cheering each other on to think of ever more disgusting ways to describe the poop, they went on like this for awhile. Finally, I had had enough: "No more talking about poop!"

I was not surprised when this did nothing to stop them. I tried again: "I mean it, no more talking about poop. Please."

The "please" did it. They both got silent for a moment. N spoke up, "Okay, mommy, we won't talk about poop anymore."

"How about we talk about butts instead?" 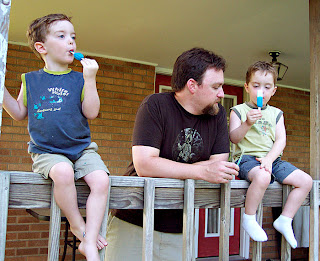