Yesterday, the boys and I took Daisy for a walk. It was probably the second time we had been out of the house for more than a week. The boys had their tonsils taken out last week and it's been rough. The boys have mostly recovered by the end of this week, but we're still taking it day-by-day.

As I walked Daisy (or rather, was dragged along by Daisy), the boys rode their scooters. They also wore their bike helmets. I'm a little over-protective, I know - but if you had a husband who's deaf in 1 ear because of a bike accident as a kid, you'd want your babies to wear helmets every day of their lives as well. Mostly, the boys don't mind wearing the helmets, but lately, they have been wanting to skip them when they ride their scooters. Today, however, after a LONG week inside the house, I didn't give in. I made them wear them. 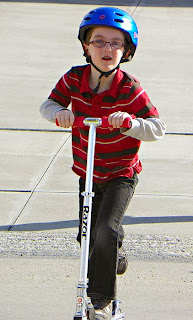 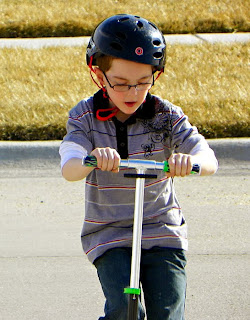 Basically, he wanted to be sure the little girls knew he would never, ever make the dorky decision to wear a helmet while riding a scooter. Jack just looked blankly at him, not having the wherewithal to be embarrassed about how he looks yet, apparently. And I cried a little inside, knowing that the days of growing up into pre-teens are quickly approaching. Sigh.
Posted by Lissa at 7:51 AM