So this weekend, major transition in our house. First, brace yourself for a shocker. Our boys were still, yes, at more than three years old, sleeping in their cribs. We had every intention of changing them over to official "toddler beds" (which is just code for we-took-off-the-side-rail) but we, being as always lazy, never got around to it. Besides, I reasoned with myself (as I often do), it's better to just leave the side rail down since they could roll out of the toddler bed and hit their little heads on the floor.

So back to the major transition. We finally decided it was rather ridiculous for two 38-pound children to sleep in cribs, let alone accounting for the times when they actually sleep together (nearly every night until we separate them, whether due to sleep or just hitting each other in an annoying fashion), bringing the weight combination to well past the recommended limit. I won't even mention the time when B climbed into the crib himself while playing hide-and-go-seek. (The boys loved it while I worried about the bed's resell value.)

How do I keep getting off track here? Back to the transition! So we put up a big boy bed this weekend! We meant for there to be two beds, one twin sized for each (how perfect is that?! They're twins too, after all. Now it makes sense.) but we were missing several parts for the second bed (ahem, my mom and stepdad had them hidden away, even though they tried blaming us initially). The boys each picked out a comforter set - construction for N, sports for J (my mom panicked - now we'll have to redecorate with half the room in each theme! I had to talk her down from that one). We set up the bed and told them they would be sharing the bed this week until grandma and grandpa brought the parts for J's bed this weekend. And wouldn't you know that every morning, N tells me, "Grandma D is bringing the parts for J's bed this weekend!" (I'm guessing he wants J out of his bed.)

So that was our major transition - and the boys are very happy in their big boy bed. Me, however, I was a little sad. B was sad too but not as sad as me. I don't have babies anymore. Sigh. So I was sitting on the bed, being sad, thinking about how sad it was, sigh, and J asked what was wrong with me. I told him I was sad. And then J said, "Don't be sad, mommy. It's just a big boy bed."

And, as always, he was right. 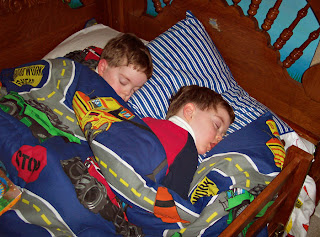 You could decorate their room with pictures of the under-construction Sprint Center, thereby unifying the themes...