We have a set of Bob the Builder books from my mother (and no, Mom, it's not Builder Bob! How many times do I have to tell you?? Geez!!). The boys received this book set when they very young, like maybe before they had teeth - in fact, it had to have been before teeth because the books are incredibly mauled and sucked on. We never had a rule in our house about books not being handled by babies because I love books. And I wanted my children to love books. My husband likes books, but not like me. I HEART them.

The Bob the Builder books came in a little blue cardboard toolbox with a snap on the front and a little black handle on top (probably you all have this same set as I'm sure it came from Costco or Sam's or some such place). The toolbox, at this point, can hardly be called a "box" as it only has, more or less, three sides and the top doesn't really close. The books really had been retired from daily rotation by the boys who had kind of moved on from Bob the Builder (again, MOM, it's not Builder Bob! Seriously, quit saying that!). But a few nights ago, the Bob the Builder books made their way down from the bookcase and J&N spent several minutes reliving their childhood.

I forgot to mention that there are four of these books in the set and each book is shaped like a tool and the story in the book is a very simple, rhyming story about the tool. I was going to say that I had them memorized but now for the life of me I can't recall a single line from the stories. That is so weird. I must have forgotten them to make room for all the names of the monster trucks on the Monster Jam circuit and their drivers. Oh well.

And now we can finally come to the point of my story - one of those books is shaped like a screwdriver. (And you know it had to happen eventually.) N took the screwdriver to his father and said "I'm going to screw you, Dad!" 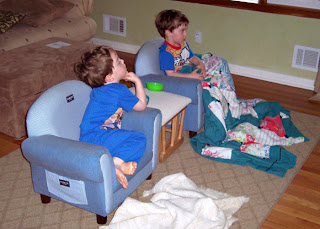