Big news from this weekend - J&N can officially climb out of their cribs! What's that you say? What kind of cruel parents have kept their nearly pre-teen boys stuck in their cribs all this time? To that I answer, if they can't get out on their own then they can just stay there. Humph. J has finally worked up the gumption to thwart my evil plan to keep them contained until high school. While in a very serious timeout violation in his crib (because he wouldn't just stay in his room), he surprised me by showing up in the playroom a few minutes later, completely unassisted. I was extremely shocked and chagrined to say the least. I played it cool though, so he didn't think he'd gotten the better of me. (Needless to say, I feverishly dialed B on the phone, whisper-shouting that J had CLIMBED OUT of HIS CRIB and oh god what we will do now?) Our dear babysitter A took it very much in stride - her response: They've had a good run! So very true and yet so very sad. They are no longer my babies and wishing it were so will not make it true.

So I gave up and left their side rails down lest they injure their tiny little legs trying to catapult themselves to the ground. I overheard them discussing their freedom last night (again, spying on them from a crack in the doorway). J wanted N to climb out and retrieve his green frog from the floor for him. N told him no, he couldn't climb out (hah! score one for mommy!). J was insistent and N, out of spite I believe, just would not give in. They didn't come out of their room once we put them to bed, so maybe this won't be the nightmare I had anticipated. 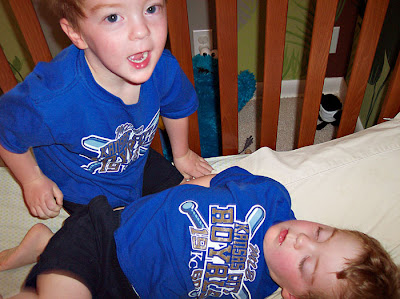