This is what N says to me this morning, after I inform him that his most revered television program "Monster Jam" (which is neither about monsters nor jam but rather a twice weekly showing of the various monster truck competitions around the country, and yes, N knows every monster truck's name) is not on the DVR for him to watch at SEVEN AM. It took me a full minute to decipher what he said, so shocked was I at what had come from my otherwise sweet and lovable THREE-YEAR OLD.**

So I talked him into playing monster trucks instead. He heard J stirring around in his bed and went to investigate. When he saw that J was awake but not yet getting up to play monster trucks, he told J, "It's okay J, there are no monsters in our room!" (I'm not sure where that one came from but maybe because it was still dark? Who knows...)

As I changed J's diaper, I asked him if he had a good night sleeping and he told me that he had "dreamed of playing in the dog mud with black and white dogs and by myself." This one I can't interpret.

**On a unrelated note, I caught myself doing one of those "when I was your age, we had to walk to school through four feet of snow uphill both ways" kind of things where I said to N, "Hey now, listen here, when mommy was a little girl there was no digital video recording device and I had to watch Sesame Street when it was actually ON or I missed it altogether. So just because we CAN record Monster Jam doesn't mean that we..." and then I trailed off because I remembered how ridiculous that argument always sounded to ME when I was a kid and I didn't think I wanted to be in that position on the other side. Sigh. N didn't notice anyway - he was already busy playing with his monster trucks. 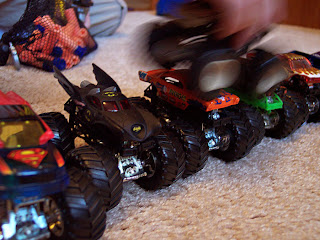 Ah,the trials of digital parenting. After a long road trip with some friends (and their two year old son), I'm convinced the worst parenting mistake one can make is to let your child know that the iPod has a back button. Thirty-five repetitions of The Hokey Pokey later, his Mom finally told him that the iPod was tired and needed to take a nap.