Up for the Challenge

Trying to transcript out what the boys are saying lately has become very challenging. It's not quite the same as having two kids who are, you know, talking. These two guys are the SAME EXACT age and literally have the same maturity level (as far as I can tell, I'm not a scientist). So here's how a conversation generally goes with these two goofballs:

Okay, I'm going to give up at this point and just try to tape it or something. It's impossible to script out how two three-year-olds can talk/scream to/at me and to/at each other at the same time while causing their own mommy's brain to melt inside her head. Most of the time it's slightly funny, if exhausting. Other times, well, there are days when I try to figure out how I can get back to work as soon as possible. And usually that's only by 9am on a Saturday morning. 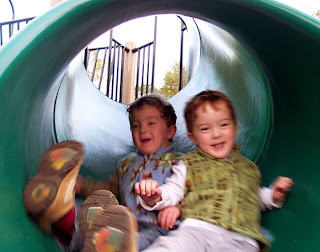