The Sound of Silence

The power went off in our house yesterday while the boys were at home with J, one of our awesome babysitters. Not a huge deal but annoying all around. Our house is old, yes - not ancient but 50 years or so. So I blame the fact that there is only one outlet per room, which is not nearly enough to handle the modern era's capacity for electronic devices, as the reason that our power flickers continually.

Later that night, the boys were playing in their room with the light off so I turned it on. Well, I guess the power being off made a huge impression on them because they both began shouting "The power's back on Mommy! The power's back on!" I felt like a destitute parent, whose children could never count on having electricity. Sigh. At least they were happy about it! Electricity! Light! Oh boy!

The whole reason I'm even writing this story up is that I wanted to mark a momentous occasion: last night, the boys played BY THEMSELVES for 25 MINUTES ALONE WITHOUT US. That is the first time we've had that happen, at least while I was around to witness it. B claims that they have done that for him before but I've never seen it. Kind of like a good car buying experience - you hear it happens but you wonder why it's never happened to you.

We were quite flabbergasted by the boys playing by themselves, and we weren't quite sure how to handle it. It was bath time, after all, and we are quite rigorous about getting them into bed on time because, you know, we like to drink after they are asleep. B whispered to me as we peeked around the corner at the two of them, happily playing with their Little People: "What should we do? Do we let them keep playing or start their bath?" I looked at him like he was nuts and whispered urgently back: "Are you kidding??? Of course we leave alone!" 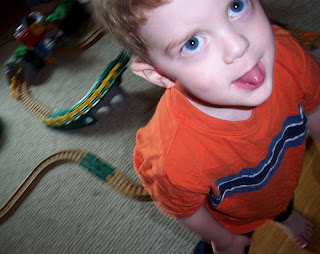 And what did I do with my quiet time? I washed the dishes. In silence. No one was head-butting me in the butt or smacking my legs with their monster trucks. In that moment, I realized for the first time how much I loved doing the dishes. Or maybe I was just high on the silence.

After the dishes, I happily played monster trucks with them for another half hour. After all, they are pretty cute when they're in good moods. And, you know, I love them and all. 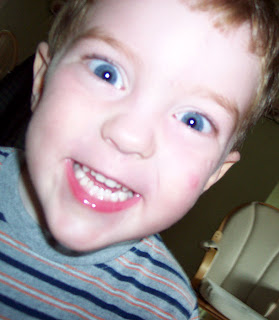 My beloved took the little angel to Iowa for the weekend, and I stayed back to work (you know why). I was alone in the house at night for the first time since the little angel was born. I was almost seriously high with the freedom of it all. Then I promptly got lonely at bedtime.