Last night I heard J telling daddy that he wanted to be a baseball player when he "gets big" which is his code for "when he grows up." I just about heard B cry with happiness because he loves baseball (even though he denies it - all while he's watching EVERY SINGLE ROYALS GAME, all two hundred and forty-six thousand of them). J is a fairly athletic little guy, so who knows? Maybe he will play baseball.

N, by contrast, is very mechanically-inclined. He loves vehicles of every single variety. Mainly monster trucks but anything with wheels will do in a pinch. When asked what he wanted to be when he "gets big," he unhesitatingly replied "Because when I get big, I want to work on trains. And on roofs." We know that this is a combo job he has created because B works on trains (or rather, on the communication parts of trains), and because N was extremely fascinated this summer by the three roofing crews working in our neighborhood, including the one that worked on our very own roof. Apparently, he thinks there is nothing cooler than being on a hot roof all day.

But you know what? Being a mom means that by god, if he wants to be a roofer, I will help him fulfill that dream. 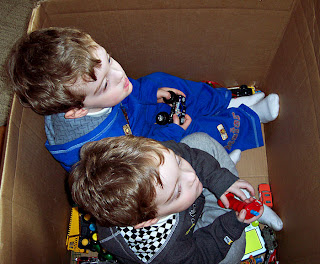